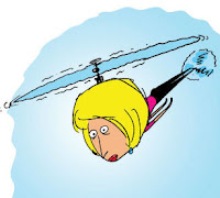 I’ve done all these to varying degrees to convince my kids to do the things I want them to do — like eat, sleep, homework, chores, enrichment, leadership, exercise, socialize.

My kids are now teenagers and have excelled in many pursuits — honors classes, gifted programs, music solos, sports teams, academic competitions. Was it a result of my cajoling?  In spite of it? Or irrespective of it?

I like to think I had a hand in helping them achieve greatness. But maybe I’m really bullying them into putting up with something they don’t like.

One of my son’s high school teachers told me that kids should decide on their own what to pursue, especially as they get older. Don’t step in to guide them; let them choose.

If given the choice, my son would spend every day playing X-box. Some kids get bored of video games; mine does not. I’ve seen him play for 10 hours straight day after day. My helicopter tendencies kick in, and I feel a great urge to suggest other activities. If I get so much as a “maybe,” I’m on it. Finding the program. Signing him up. Keeping him involved. Guilting him into success.

This summer I did just that. My 15-year-old said he was interested in a computer programming class, but he did nothing to pursue this interest. So I searched for hours, and found many camps and classes out of the range of our budget, including a community college course that required a series of steps to get him into it. Apply for early admissions. Meet for an interview. Schedule the class around his baseball and tennis commitments. Find a scholarship to pay for it. Order the book. Wake him up and get him to class. Make him schedule time to study for tests and finish projects. Reward him for a B in the class.

He would not have done any of this on his own. He liked the idea of taking the class, but not enough to take away time from video games to do all that. We would not have been able to afford the class without financial help. So I printed the scholarship application and kept reminding him to fill it out before the deadline. I emailed the teachers asking for the recommendation letters.

That’s when I got the harsh rebuke from one of his teachers:

“I believe (your son) should be asking me to write this letter on his behalf, not you… I’ve written hundreds and hundreds of recommendation letters over the years, but I have never been asked to do so by a parent on behalf of their child.  At this level, the student should be initiating that communication – in person… the writing on the application should be his own.  The “ask” for the letter should come from him.  The management of the paperwork should be by him.  Please have (your son) ask me personally; I would encourage you to have him complete the written application as well.”

OUCH! I was insulted by being called the most overbearing helicopter parent this teacher had known in 26 years of teaching. But I figured he must know more than I do about how teens should be handling their own responsibilities. So I backed off.

I told my son to schedule his own songwriting lessons. He texted the teacher a few times, but those sessions tapered off without my “interference” to make them happen.

I stopped staying up until he goes to sleep, and now many nights he’s up past 12 am, 1 am, who knows how late?

I stopped cutting up apples and putting bowls of carrots in front of him, and now he buys his own chips and candy and pop for snacks.

I stopped reminding him repeatedly to apply for leadership positions at his school, and now he lets forms sit empty while deadlines pass.

I stopped requiring him to practice music regularly. His interest in jazz band is now waning, and he asked me if he can quit.

He is a very talented musician, who started playing songs at age 3 and earned a spot in his junior high jazz band two years before entering junior high. He takes lessons from a top professional who calls him a prodigy. He seems to have perfect pitch and earned a rare spot in the highest-level jazz band at high school as a freshman. Although I know he doesn’t want to pursue music as a career, I had hoped he would stick with it long enough to get a big music performance scholarship from a school that wanted to woo him to join their jazz band.

But I’m supposed to be letting him decide what he wants to pursue, right? So I told him if he no longer wants to play jazz music, then he should finish out the semester and quit.

Today my son explained to his music teacher that decision he made on his own, and now that teacher wants to talk to me — the same teacher who told me not to interfere. The same teacher who told me not to contact him to write a letter to help my son get funding for a computer class he would not have pursued without my pushing. But this time it’s about music, which is what this teacher has spent his life guiding students to pursue.

All along, I thought that I knew more about my own kid and what motivates him and what’s best for him than anyone else. But this teacher and the push back against helicopter parenting  convinced me that I’m hovering too much and should let him decide. Now that I’ve learned to let go and that decision affects this teacher’s beloved band, suddenly the teacher’s attitude is different.

So is the rational for helicopter parenting only apparent when it’s convenient?

I recently wrote an article about helicopter parenting, where I admitted I am one of them who is trying to back off. When I support my kid’s own decision that I disagree with it, NOW the teacher who pushed me to adopt that laissez-faire attitude wants to talk to me. Just when I thought I’m not supposed to be part of these discussions anymore, I’m pulled back into them! So who’s hovering now?