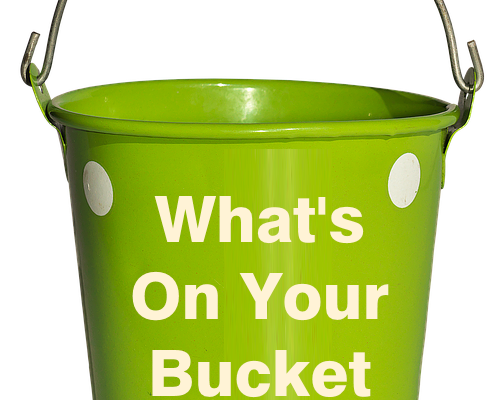 Some people think a bucket list is something to do eventually, maybe in retirement or after you’ve done the things you’re “supposed” to do.

I met someone in the past year who described her meandering path in life as completing her bucket list first, before finding success in other areas like a career. I realized I did this in a sense myself, and I’m so happy I did.

I read recently that the mayor of Chicago decided not to run because he wants to have the time to do things with his wife that they always planned — hinting at a bucket list. He said he sacrificed time with his family while devoting so much energy to running a major city and his political career and realized this as he dropped off his youngest at college.

For some people, I can see how that makes sense. But to others, like me, that would be too late. I wanted to carve out more time for life’s most satisfying pursuits long before my kids went to college.

Though I had dreams of a highly successful career, I dreamed just as much about being a hands-on mom. I found a way to sacrifice a little of both, so I didn’t have to give up one for the other. I even found a way to get to the oft-repeated “bucket list” long before my career or parenting were in the rear view mirror.

I had a very strong desire to get a job as a television reporter right out of college, but my desire to move to a small town (which is usually required to land your first job) was not as strong. So I ended up in Los Angeles and worked as a reporter at a newspaper and postponed my goal in broadcasting. And while I carried some frustration that I wasn’t pursuing my true calling, I was not motivated to leave because I was filling up much of my bucket during that time — clubbing at the trendiest places, covering all the celebrity parties, getting the VIP invites, hanging out on movie sets and backstage at concerts, biking the Pacific coastline, vacationing throughout the beautiful southwest, and feeling exhilarated about life as well as who I was, how I looked, and what I did. I didn’t get to live this life because I had a lot of money, but I used my creativity and time as resources and found a way to do all these things despite my low-paying journalism job.

I was determined to eventually get a job in broadcasting, even if it meant moving to a small town, but I pursued that and landed a career as a television reporter after I filled my bucket with those awesome experiences.

I also had a very strong desire to be a mother, but my desire to establish my career first was stronger. I knew that the kind of mother I wanted to be would force my career to take a back seat, so I waited to start trying to have kids — until after I filled my bucket with the adrenaline-pumped excitement of working in live television first.

After my first child was born, I told a close friend I was taking some time off my career to be home with the baby. He was incredulous. “You worked so hard and were so dedicated  to get into TV, and now you’re going to walk away from it?” he questioned me. I didn’t waver. I knew my new goal was to make sure I carved out extra time for family before my kids left the nest. I did not want to regret spending time at work and away from them when I dropped them off at college.

So I made a choice to stall my career to be home with my children — not as a martyr for them but as a way to design the life I wanted. I embraced and loved all the things a stay-at-home mom can do (afternoon hopscotch, hosting playdates, girl scout leader, room mom, soccer coach) while maintaining my career part-time. I didn’t get the biggest stories or the awards or move up to the bigger markets, but I thoroughly enjoyed being a hands-on mom five days a week and a television reporter two days a week.

I know that not everyone dreams of that kind of work-life balance, but for those of you who wish you could do that but feel stuck devoting too much time to work, I’d like you to know you  can create the life you want. You don’t have to take only what’s offered. If it doesn’t seem feasible financially, you have to use your creativity, connections and other resources to make it happen. And believe.

We sacrificed having certain things money can buy like new clothes or new furniture or exotic trips, but we enjoyed our home and our camping vacations and our community’s parks and schools. I think this was easier because I knew I had already filled my bucket with amazing experiences long before we settled down to focus on our kids.

The time to live your bucket list is now. You don’t have to wait. If you make sacrifices or postpone a goal or dream, do it because that is your choice. Not because you feel you have to. And your bucket will be full long before you retire.