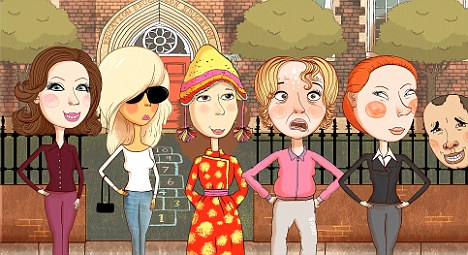 When working moms leave behind the business world to stay at home with their kids full-time or part-time, they may be surprised to find there can be just as much office politics on the playground as in the corporate conference room. It’s what I learned when my first child entered kindergarten, and I was eager to join the list of Room Moms who would help in the classroom. I live in a suburb where many moms stay at home and many moms work. I was in that in-between place where I worked part-time and stayed home part-time. I stuck with that schedule mainly because I wanted the stay-at-home experiences like volunteering at my kids’ school without giving up my career entirely.

When I went to the first meeting to learn about the duties of a Room Mom, I found out that I had stiff competition. It seemed half the kindergartners had stay-at-home moms who wanted to be involved. Of course this is great for the school and great for the kids, but we had to figure out how each of us would contribute without stepping on each other’s toes or bruising each other’s egos.

I eventually was put on the team of Room Moms who planned the classroom holiday parties every year. I didn’t get picked to be the mom who helps the teacher with reading groups or making copies, and I was okay with that. I didn’t get picked to go on the field trips, but I figured those would come later (and they did). I love to organize and run activities and chase around the little ones, so I figured this was a good place for me.

At the first meeting, I realized having ten moms planning and running a party for five-year-olds was going to be a challenge. I threw in a few suggestions that were promptly dismissed by the moms who seemed to be “in charge” — the ones who knew each other because they were the “walker moms” who chatted every day outside the school doors with each other and the teachers as the kids entered the building. My kids rode the bus. Some of the other moms who already seemed to know each other had older kids. My kindergartner was my first foray into the PTO world.

Even though I wasn’t an active part of planning that first room party, I continued to offer my suggestions and by the last party of the year, a couple of my ideas were included in the plans. I even got to run the game I suggested, which thrilled me.

By the next year, the number of Room Moms had dwindled, but there were still about six of us. At the first meeting, no one seemed to be in charge. I’m the kind of person who likes to step in and take charge, so I filled the void. I had already come up with an entire plan for the party, and I presented it. No one seemed to object. I asked for suggestions for food and drink, because my forte is entertainment and definitely not meals. I delegated the various duties, and we moved forward.

I was a bit worried because there was no vote, and I didn’t know the other moms as well as they knew each other. I didn’t know if it was okay that I kind of “took over.”  I  worried about it for the next year or two, especially any time there was any kind of objection to my plans from a mom or two  who said the kids would rather sit and talk than participate in organized games. (I always countered that the games were optional, and we told the kids that. Few ever sat out.)

By the time I had been a Room Mom for several years, one of the other mothers pulled me aside and thanked me for all the effort I had put into making the parties so fun — coming up with unique activities (like designing my own scavenger hunt), bringing all the supplies, running the games and assigning the other moms to their party-day duties. I told her I was worried that the other moms thought I was taking the “fun” stuff away from them, that I was forcing my agenda on them, that I was building up resentment towards some sort of super mom who could bounce in and be the party leader (which I wasn’t, because I couldn’t run the activities by myself, and the other moms could take credit for all the great food). But she reassured me, on the contrary, they were relieved that someone took the pressure off them to come up with engaging and original activities several times a year, year after year.

All this time my joy of this volunteer position was tainted by my paranoia that the other moms didn’t like me or my style or the way I thought I had pushed myself into the position of self-anointed game chairman. I should have just accepted the fact that if they didn’t like what I was doing or how I was doing it, they would have said so and asked for a vote.

I went on to run the entertainment for the classroom parties for a total of eight years as both my son and daughter progressed through elementary school. I put a lot of time into it; I got books from the library, scoured the Internet for new ideas, tested my own original games on my kids and their neighborhood friends, dug out supplies from boxes in my garage, and always made sure I requested those days off work far in advance. I did it because I loved it — the same reason I took on the role of girl scout leader. Devising creative ways for kids to have fun in groups and then keeping them on task is one of those passions in life that some people get paid for, but I would do for free — which was good, because as a Room Mom volunteer, I was doing it for free. I didn’t do it out of obligation; I did it because it’s exactly the kind of thing I wanted to do for my kids and their classmates and me, when I chose to put my career in neutral while working part-time for 15 years.

But I didn’t enjoy the parties the first few years as fully as I could have, until another mom took the time to tell me that she and the other Room Moms approved. I somehow thought that they perceived me to be “stealing” the fun job while they were relegated to baking cookies, planning fundraisers, running PTO meetings and other tasks I didn’t want to do and, therefore, didn’t volunteer to do. But the fact was there were other mothers who didn’t want to corral 60 third graders into a big circle and have them throw water balloons at each other. Those other moms wanted to relax under the shade of the oak tree chatting, while I tied up little legs for the wheelbarrow race. Some other moms wanted to decide how the PTO would earn and spend money. And plenty of moms loved baking (not me!). I found out they mostly volunteered to contribute in the way that suited their life and personality and passions.

And now my passion is the reason I declared a week ago that I intend to start writing one blog post a day featuring a lesson I learned from another mother. It’s part of my new push to devote full-time effort to my journalism career and create an OverAchiever Mom TV show for working moms now that my kids are teens, with the hope that some of the experiences I share will be like the whispered advice that I received from other moms during the past 15 years of this motherhood journey. Prior to announcing my new goal, I had only written two blog posts in the past four months, despite my best intentions. Now I’ve written two posts in one week. It’s not the seven posts I promised in seven days, but I’m happy with it. And if you don’t approve, that’s okay. You can enjoy the shade of the oak tree, and I’ll wave and smile as a water balloon hurls towards me and rolls off my back.